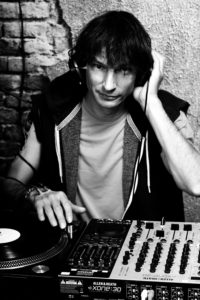 DJ, producer, composer and musician, DJ St. Paul is a multifaceted artist. His heightened sensitivity and his innate sense of groove make his tunes, remixes, DJ sets or live improvisations strong and unique experiences that this music-teller shares with joy and simplicity with all the party people on the electronic scene since 1984.

From 1984 to 1989, when they set up the first discotheque for young people at the Centre de Loisirs de Martigny, he naturally worked as a DJ. The infinite sequences of songs, dance, hypnotism, synthesizers, EBM with Front 242, everything about synthetic music calls him. During this same period, he was in charge of the technique and part of the programming for the program Disconexion on Radio Martigny which became later Rhône FM. This show gave birth to his artist name St.Paul and to the first electronic parties (EBM, New Beat, Acid House, Hip House and Psychedelic) under the name Disconexion Live that later became Party Zone, organized jointly with Sébastien D’Amico.

He was resident DJ at the Cravache Club in Ovronnaz during the 1990-1991 season and, the following year, at La Dili in Anzère. At the same time, the Party Zone parties continued, notably in disused industrial premises Warehouse N°8 (reassigned for one evening :-). DJing necessarily opens him to other ways of conceiving music and, in 1990, he found Genetic Dysfunction with David Scrufari; as for Jean-Loup Ribordy and Vicky Peters, they are added to the live formation in the style Psychedelic Acid Trance a few months later.

In 1992, he turned to Industrial Acid Hardcore as DJ and live (St.Paul Live and Ox-Udder with Karim Vouilloz) and continued to organize Party Zone parties where Anne Dorsaz’s decoration (A’N’DN Deco) became as important as the music. In October 1992, Party Zone split into two entities; St.Paul organized the Party Zone Frequence Alternative parties with a more radical vision of music and, until mid-1993, programmed the electronic parties at the Caves du Manoir in Martigny under this name. In October 1993, he founded Cyberpunk Movement, precursor of Psyberpunk, and, until 1995, dismantled the dancefloors with an extreme Hardcore acid trance and industrial, accompanied by smoke mist and thousands of stroboscope volts. Throughout 1995, the public came to hear his mix at the biggest raves in Switzerland (Cubik, Evolution, Ravestorm, Pyramid, …) or play live with Genetic Dysfunction (St.Paul and David Scrufari).

However, it has always been difficult for him to confine himself to a single style he added, in 1994, another side to the Cyberpunk Movement Hardcore nights: Psychedelic Acid Trance and Ethno Tribal Ambient DJ sets. Zen Paradox, Lumukanda and Solar Quest accompany him with their live in delirious melody that prefigures what is now called Psytrance Goa. During 6 months, from the beginning of 1994 to mid-1994, Jean-Bernard Granges aka JB joined Cyberpunk as co-organizer; from mid-1994 and for one year, he gave his place to Denis Kaser, manager. JB, Sébastien and St.Paul have been squatting since the beginning of 1994 and for more than a year, a place close to Martigny in which they set up an illegal club L’Inox which will host wacky electronic parties!

In September 1995, the first fluorescent decorations born from their collective imagination and realized by A’N’DN Deco appeared. A few months later, St.Paul losts the person most dear to him (A’N’DN Deco) and totally abandon the ferocity of Hardcore music to turn him towards the lyricism of psychedelic music. On 31 December 1995 the live band U.V.W. (new name for Genetic Dysfunction) in which St.Paul and David Scrufari play was born within the Cyberpunk Movement. The Cyberpunk Movement is completed by a manager (Alain Viglino aka Brousse) who will join some time later U.V.W. as a musician. The band also welcomes other musicians who regularly join U.V.W. since mid-1996: Julian Humphries and Barry Roberts (percussion), Claude Jordan (flute) or Ruedi Bühler (trumpet). Since 1996, the Psychedelic Acid Trance operates its moult and becomes Psytrance Goa, adding to the sound hallucinating decorations that are an integral part of parties. The Goa wave is spreading throughout French-speaking Switzerland, as his weekly residence in Les Métissages on the national radio station Couleur 3 shows from April 1996 to June 1998, and floods Switzerland and the world, allowing him to perform in many national and international clubs. In May 1997, he left U.V.W. and in September 1997 David Scrufari did the same, giving up Cyberpunk Movement. At that time, Samuel Rappaz aka Sam joined the movement as co-organizer and co-decorator. At the end of June 1998, Cyberpunk Movement becomes Psyberpunk Corp. from which he moves away at that moment.

In 2009, he created Orange & Lemon .org alongside Anne Darbellay and devoted himself to music production with various live projects (including Genetic Dysfunction) and Dj, as well as through the production of an ambient album under the pseudonym Mood Ticket. Beside his activity as a musician, he is involved in the cultural world and has been a member, since 2012, of the Major Octopus association whose aim is to open an art center in Valais.

In 2014, EJMA Valais (School of Jazz and Contemporary Music) appoints him as coordinator and professor for the setting up of Djing and MAO – Computer Assisted Music courses.

In 2020, the mythical German band Hardfloor chooses one of his Acid productions under the pseudonym St.Paul on acid for its Versus series. In 2022, he released on his label Orange & Lemon the EP Acid Stories under St.Paul on Acid.

We use cookies on our website to give you the most relevant experience by remembering your preferences and repeat visits. By clicking “Accept All”, you consent to the use of ALL the cookies. However, you may visit "Cookie Settings" to provide a controlled consent.
Cookie SettingsAccept All
Manage consent

This website uses cookies to improve your experience while you navigate through the website. Out of these, the cookies that are categorized as necessary are stored on your browser as they are essential for the working of basic functionalities of the website. We also use third-party cookies that help us analyze and understand how you use this website. These cookies will be stored in your browser only with your consent. You also have the option to opt-out of these cookies. But opting out of some of these cookies may affect your browsing experience.
SAVE & ACCEPT